A few weeks ago I had the opportunity to meet Maine author Tess Gerritsen. She’s most known for her book Gravity (1999), and for her crime series Rizzoli & Isles, for which the title crime series on TNT is based. We had a great chat before her book launch event at the Owl & Turtle Bookshop in Camden. I was even lucky enough to have a photo taken of us (with my fellow fan, Meghan), which I’ve attached.

Admittedly, even though I’m a fan and supporter of her work, I’d not read any of her books previous to this one. But honestly, Playing with Fire was the perfect place to start. Fast paced and extensively researched, Gerritsen effortlessly juxtaposes two seemingly unrelated stories. There’s Julie, living in present-day New England. A mother, wife and professional violinist, Julie happens upon a mysterious and foreboding piece of music. Then there’s Lorenzo, a young Jewish-Italian. It’s 1944, and, although war wages in neighboring countries, Lorenzo and his family feel relatively safe in their Italian-Jewish community. Lorenzo’s love for music and the violin has led him to meet Laura, also a violinist.

So, I sat down with Tess to talk about Playing with Fire * here’s how that went:

So, tell me about the book.

“It’s not a fun novel, in that it’s not a traditional crime novel.”

It started with a nightmare. I was in Venice for my birthday and I dreamt that I was playing my violin, and I was babysitting. Something about the music was disturbing, and the baby’s eyes glowed red and she turned into a monster. And I woke up and I thought “what is this all about, this evil baby!”. Coincidently my grandchild was on the way. I ended up in the Jewish quarter of Venice, and there are a lot of memorials there for 246 Venetian Jews that were deported during WWII to be sent to the death camps. I’m looking at this wooden plaque that has all these names engraved, and I had this dream in the back of my mind, and it was just all came together. So I went home and I wrote this story about the violinist. And she picks this piece of music and she plays it and her three year old essentially turns into the monster that was in my dreams. And halfway through writing the book I had another dream, and I dreamt about the music. So with this other dream I woke up with the melody. And I composed the music, and it’s been recorded on ITunes.

I get the sense that it’s the kind of book that you always wanted to write. That it came from a place of passion.

There are some books you have to write because you’re under contract, and there’s some books that you can’t not write because your heart won’t let you. It’s like I’m standing there looking at the plaque of the names and it’s like a ghost came over and whispered, ‘you have to write this book’. Also, it gave me a chance to explore what I didn’t really know very well; and that was the Jews in Venice.

I didn’t even realize that Italian Jews were affected.

Well we don’t really hear about them. The number of Jews who died in Italy were so much lower than in Germany.

At first I was intimidated by the musical phrasing and jargon – I wasn’t sure that this was a book I’d understand or appreciate as much as someone who is musically inclined. But your passion is clear, and that transcends throughout.

Well I’m not Jewish, and I thought ‘ well what right do I have to tell this story?’, So I felt that the way I would tell the story is because I do belong to the same tribe in the way that Lorenzo does, and Julie does. We’re all in the same tribe of musicians. It connects you across countries and centuries and ethnicities. And so I knew I could tell the story from the point of a musician.

You seem to be this Jack-of-all-Trades.

What else do you plan to do? What’s next for you?

My son and I are making a horror film. We will start filming in March, made an entirely Maine cast. I wrote the script, and it’s called Island Zero. It takes place on a Matinicus-type island**. Secluded. We’re actually looking for a lead female. Tough, like Carol from The Walking Dead. Know anyone?

And your son is the director?

[My son] essentially grew up with a camera attached to his shoulder.

Tess Gerritsen will also be signing books at the Bangor Books-a-Million (BAM!) on Saturday, December 12th at 2pm. You can ask her all your questions then, and maybe pitch your acting skills! 😉 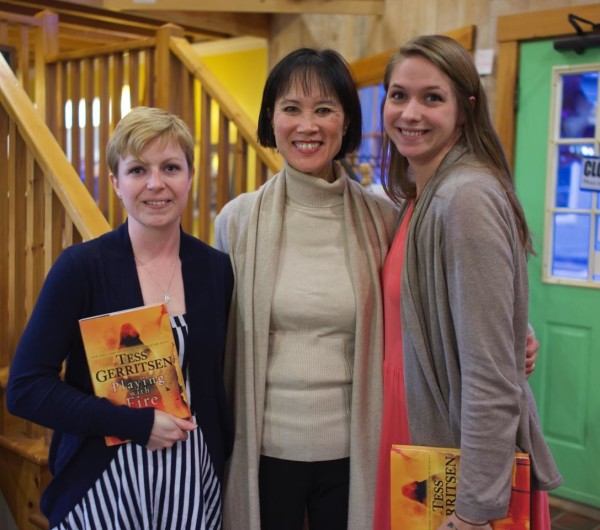 Happy Reading, all.
*Playing with Fire by Tess Gerritsen. Released on October 27th 2015 by Ballantine Books.

** Matinicus Island is 22 miles off the coast of Maine – very secluded, with only about 75 people living there.

I'm a mother of two, living in the outskirts of Hampden, Maine. I'm passionate about books, and living a family-focused life. I was diagnosed with narcolepsy as a teen - a neurological sleep disorder that keeps me awake at night, and tired throughout the day. I've comfortably coupled my disorder with my love of books. Who doesn't love books and napping together?

Try an ice hunt before it is gone.

Try an ice hunt before it is gone.

This blog has been archived

This blog has been archived and is no longer being updated.